Teenagers often act like everything in high school is as serious as life or death. In this case, it is. With a timely take on the brutality of student life, All of Us Are Dead resurrects the zombie genre. Based on the 2009 webtoon 지금 우리 학교는, or Now at Our School, this K-drama shows that everything that happens at Hyosan High School could happen right now at any school. Just without the zombies.

The first episode begins on a rooftop on a rainy night—rarely ever a good thing, where bullies viciously attack another student. Things aren’t as they seem though. After two frighteningly unique scenes and the visually unsettling intro, we are whisked away to a daytime tour of the school. Before you form a complete thought, like ‘Cool, they have a successful archery team!’, the camera settles on a student alone in the science lab. This looks bad and it is. The familiar-looking science teacher, played by drama veteran Kim Byung-Chul (SKY Castle), arrives to start connecting some dots.

Soon we meet the potential breakout stars of our cast. Fresh-faced Cheong-San (Yoon Chan-Young) and lovelorn On-Jo (Park Ji-Hu) are our heart-of-gold and effortlessly endearing protagonists. We also meet On-Jo’s paramedic father who presciently states, “Everyone’s equal in an accident.” Following shortly after are loner Cho Yi-Hyun (Nam-Ra) and former bully Park Solomon (Su-Hyeok). We begin to see other students who really need help are ignored by staff and classmates. Seriously traumatic subject matter is introduced as commonplace for teenagers. While Hyosan High’s motto is “Happy Students, Safe School”, most of the students experience the opposite. Students find themselves in scenarios that will make adult viewers shudder more than any of the bloody zombie attacks.

Adults and institutions meant to teach and protect the children instead fail them at every turn. The outbreak begins and students find they are truly on their own. The staff, mostly at the ignorant demands of the principal, have left the students alone and defenseless (and without phones) while they themselves are unaware students have turned rabid rapidly. The last shot is in the cafeteria where our favorite students are the next meal.

The second episode sees surviving students running for their lives from swarms of teeth-gnashing classmates. Our fast-moving and fast-thinking hero, Cheong-San references the 2016 global hit Train the Busan. Shockingly, they are aware of the “z” word! It’s rare for a character in a zombie undertaking to use the word itself. Since they know their enemy, can they defeat them? As chaos peaks, the archery team returns from a tournament. Cheong-San and Su-Hyeok are saving friends and fighting zombies (likely earning a following for both actors). Small pockets of survivors are spread perilously throughout the school. As the screen blacks out, two of our leads’ lives hang in the balance. 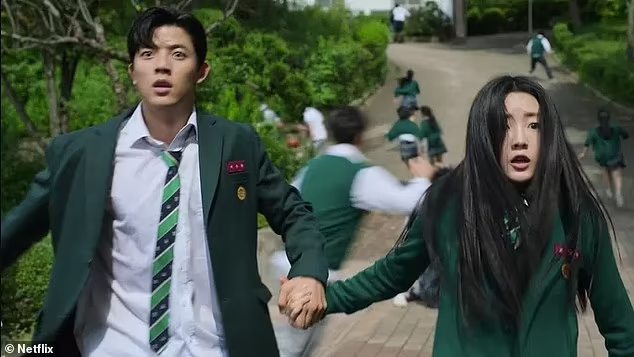 After two episodes, we know this is some kind of rage virus transmitted by bite (no confirmation on scratch) that produces fast zombies. So many questions and zombie tropes remain: Who will hide a zombie bite? When will the rich character go too far? One character in need of medical attention just walked away, is she okay? Is there a second outbreak location? Which, if any, adults will come through for these students? Are the back-breaking practical effects done by contortionists? Most importantly, is there a zombie acting course all of these performers must take?

With the promise of major action, possible romance, excellent camera work and insane horror effects, there’s a lot left to see. As for the characters, it’s looking bleak for everyone. In this drama, and maybe in real life, we can only hope the youth will band together and save themselves.

You can find all 12 episodes of All of Us Are Dead available now on Netflix.